Author Phoenix Johnson is thrilled to introduce her next title, Persephone!


In this sweet fantasy, Persephone must overcome her abusive past and the alluring call of the Darkness to discover her destiny and the truth about her heritage.


Released August 1, 2015, Persephone is the sweeter side of fantasy, much like the books Phoenix grew up reading. She thoroughly enjoyed writing this delightful tale, and sincerely hopes that those who purchase and read Persephone get as much satisfaction from it as she did.

Blurb
Persephone takes her future and heart into her own hands when she meets a mysterious man on a sweet summer day. However, when tragedy strikes, Adrian begs her to follow one request: head to the sea.
Determined to honor his request, she begins a journey where she discovers her true heritage and family. The problem is, a dangerous past is nipping at her heels every step of the way. Will she make it to the sea and find her destiny? Or will she lose everything she fought so hard to find?

Excerpt
A kindred spirit. His warm brown eyes seemed to glow in the muted forest light, and the sun coming from behind hit his hair and it shone brighter than before, almost creating a halo. She shook her head lightly, berating herself for her fanciful thoughts. He was just an ordinary man. An ordinary man who was now a lot closer and stretching out his hand in greeting.
“I’m Adrian,” he introduced himself. “I’m from Adiron, just north of the forest.”
Persephone took his hand and a small bolt of electricity ran through her arm. Her eyes widened and she saw Adrian’s do the same.
“I’m sorry,” he said. “I’m not sure what happened there.”
Persephone smiled softly, though her heart still pounded from the shock. “That’s okay.” They looked at each other and laughed as they realized they’d repeated their first words to each other almost exactly. “I’m Persephone.” She chuckled, delighting in the merry sound of his deep laugh and the way his warm eyes seemed to dance, slightly crinkled at the corners from his mirth. “I’m from Mythosandria, just through the trees to the east. To be honest, I’m also trying to escape for some peace.”
Adrian nodded, a knowing look in his eyes. “I’ll share my story if you share yours.” He suddenly grinned devilishly.
She couldn’t help but flash her own grin in response. A deep breath sent sharp pain through her ribs, reminding her of why she was out here. She grimaced in pain, holding her hands to her side.
Adrian stepped forward, concern deepening his voice. “Are you all right?”
Persephone nodded, pain straining her voice. “I will be. Just some bruised ribs, courtesy of the drunkard I’m supposed to call Father.” Slowly straightening her stance, she took shallow breaths as the discomfort subsided. She glanced up at Adrian, who stood a head taller than her, despite being rather tall herself. His eyes had darkened and were almost black. She noticed his eyes scan her face, pausing on her cheek, and she guessed that a bruise was starting to show where she’d been struck. Adrian reached up his large hand to gently brush the tender flesh and Persephone flinched as a small stab of pain radiated from her cheek. He paused, his hand hovering over the skin but not touching while his eyes, still dark with anger, seemed to search her own, looking for what she didn’t know.
“Your own father did this to you?” he demanded quietly, his voice steady but his growing fury imminent. All she could do was nod and look down. His finger hooked her chin to force her to look up. “You do not look down in shame. You have nothing to ashamed about. He’s the brute who should be ashamed. I have half a mind to tell him as such.”
As he turned in the direction of her village, Persephone grabbed his arm. “No, please don’t!” she cried, hating herself for sounding so weak. “It’s not all the time; he just has bad days, that’s all.”
“And that gives him the right to lay a hand in anger on you? You should not be defending him. You’re the one who needs defending.”
His words pricked her pride. “Like I’m a defenseless, helpless maiden in need of rescuing? I can defend myself, thank you.” Anger flooded her where fear had been only moments before. “I won’t be standing idly by for much longer, I’ll have you know. I don’t care that they have plans for me to marry that pig the mayor calls a son,” she spat. “I just need to find somewhere to go when I leave.”
Adrian stood back and looked her up and down. She watched him take in her fiery stance and nod. “Glad to hear it.”

Persephone is available in ebook at All Romance eBooks, Amazon, Naughty Nights Press, Smashwords, Barnes & Noble, Kobo, and on iTunes, as well as in paperback at Amazon, CreateSpace, and Barnes & Noble. 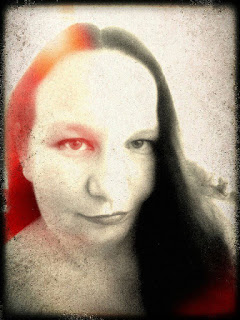 About the Author
Phoenix Johnson has always been intrigued by the written word. Even when she was a young girl, she usually had her nose stuck in at least one book, and her need to read would drive her to peruse the back of the same cereal box each morning at breakfast.
Paranormal and fantasy captured her heart, with tales about dragons, magic, and fanciful creatures sweeping her away to a wonderful new world where she felt she truly belonged. While she dabbled in writing while in primary school, it wasn’t until high school that she decided she should try her hand at writing her own book, and even gave poetry a try.
She wandered away from writing for a few years, but was soon encouraged to return and, within months of picking up the proverbial pen, Phoenix’ first story, The Wolf In The Neighborhood, was accepted for publication by Naughty Nights Press. While working on the rest of the Wolf Smitten Trilogy, Phoenix decided to take on a university degree, and is now in the final stretch of her Bachelor of Art’s degree in Professional Writing and Publishing, with plans to continue on to her Master’s degree.
In early 2015, Phoenix was thrilled to discover she’d made two Top 5 lists with three entries in the 2015 Easychair Bookshop Awards. In June, it was announced she had placed first in Best Paranormal with Once Bitten, Twice Shy, the second instalment in her Wolf Smitten Trilogy, while The Wolf In The Neighborhood and Wolf Smitten placed third in their respective categories of Best Paranormal and Best Series. With her inclusion in the Alphas on the Prowl Box Set in 2015, Phoenix hit the top 100 bestsellers lists across numerous distributors, number 1 bestseller on several Amazon lists, and this was quickly followed by the announcement of her achievement of number 1 bestseller for her publisher, Naughty Nights Press, for the full second quarter of 2015. The awards and achievements have only served to strengthen her ambitions, and she is now aiming at reaching the bestseller lists for USA Today and New York Times.
Phoenix has been working hard to make 2015 her year, and has been busy organizing paranormal anthology Twisted Tales with seven other authors. Its release at the end of June was greatly anticipated, and she is extremely excited to see where her writing career takes her next.
To follow other projects by Phoenix Johnson, please visit her website here. She can also be found on Facebook, where you can sign up to her newsletter, The Nest. She is also on Twitter.