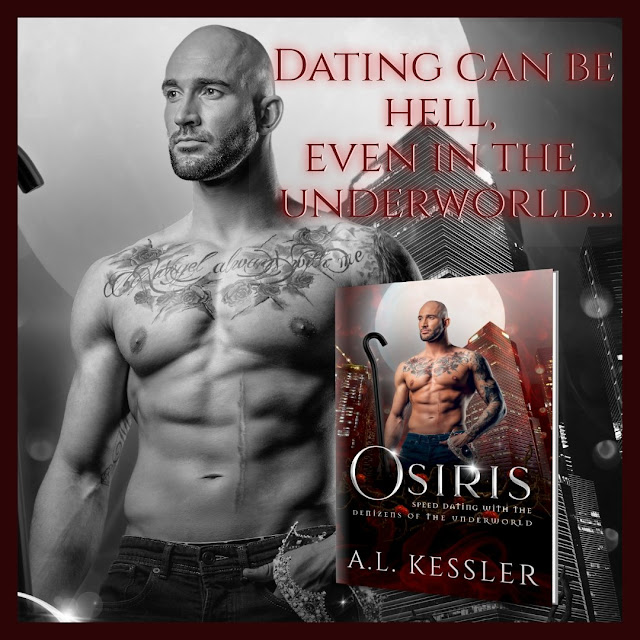 𝗢𝘀𝗶𝗿𝗶𝘀 (𝗦𝗽𝗲𝗲𝗱 𝗗𝗮𝘁𝗶𝗻𝗴 𝘄𝗶𝘁𝗵 𝘁𝗵𝗲 𝗗𝗲𝗻𝗶𝘇𝗲𝗻𝘀 𝗼𝗳 𝘁𝗵𝗲 𝗨𝗻𝗱𝗲𝗿𝘄𝗼𝗿𝗹𝗱, #𝟭𝟯) 𝗯𝘆 𝗔.𝗟. 𝗞𝗲𝘀𝘀𝗹𝗲𝗿 𝗶𝘀 𝗹𝗶𝘃𝗲 𝗼𝗻 𝗮𝗹𝗹 𝘃𝗲𝗻𝗱𝗼𝗿𝘀!
Amazon: https://amzn.to/3RgEtB8
Universal: https://books2read.com/Underworld13
Paperback: https://amzn.to/3Rqdwex
𝗚𝗼𝗱𝘀 𝗮𝗿𝗲𝗻’𝘁 𝘀𝘂𝗽𝗽𝗼𝘀𝗲𝗱 𝘁𝗼 𝗳𝗮𝗹𝗹 𝗶𝗻 𝗹𝗼𝘃𝗲 𝘄𝗶𝘁𝗵 𝗮 𝗵𝘂𝗺𝗮𝗻.
Tanya promised herself she wouldn’t let a man take advantage of her again. Struggling to make ends meet while working at a bar, she makes her simple life work.
But that changes when her friend convinces her to go to speed dating at DeLux Café. Chaos consumes the world around her as she’s pulled into the world of the supernatural she had tried to ignore.
Osiris wasn’t supposed to fall in love. His job was simple, convince Tanya to work for him so he could protect her. What he wasn’t expecting was her stubbornness and her ignoring the signs of danger around her.
When shadows and evil draw closer, he has to find a way to keep Tanya safe.
Osiris is book thirteen in the Speed Dating with the Denizens of the Underworld shared world, filled with a mysterious woman, a stubborn god, and more.
#paranormalromance #gods #Underworldseries #fatedmates #ALKesslerbooks #sexytimes #mythology #supernaturalromance #bookseries
at 5:00 PM No comments: 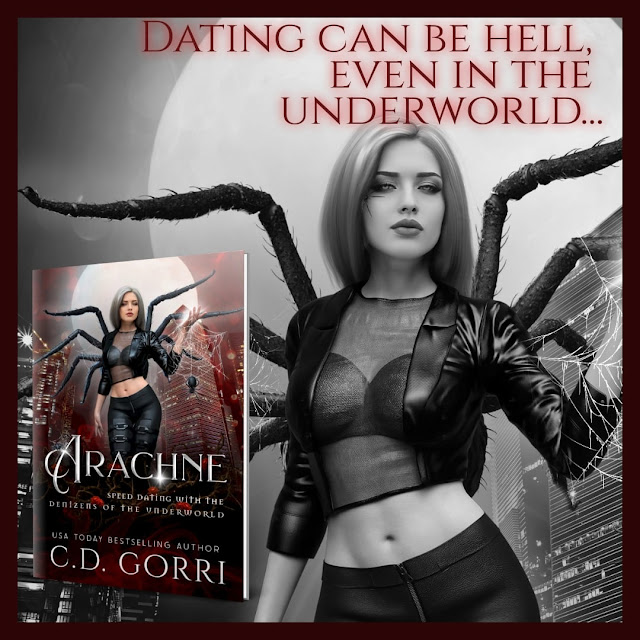 𝗔𝗿𝗮𝗰𝗵𝗻𝗲 (𝗦𝗽𝗲𝗲𝗱 𝗗𝗮𝘁𝗶𝗻𝗴 𝘄𝗶𝘁𝗵 𝘁𝗵𝗲 𝗗𝗲𝗻𝗶𝘇𝗲𝗻𝘀 𝗼𝗳 𝘁𝗵𝗲 𝗨𝗻𝗱𝗲𝗿𝘄𝗼𝗿𝗹𝗱, #𝟭𝟮) 𝗯𝘆 𝗖.𝗗. 𝗚𝗼𝗿𝗿𝗶 𝗶𝘀 𝗹𝗶𝘃𝗲 𝗮𝘁 𝗮𝗹𝗹 𝘃𝗲𝗻𝗱𝗼𝗿𝘀!
Amazon: https://amzn.to/37AfpnD
Universal: https://books2read.com/Underworld12
Paperback: https://amzn.to/3A8qNRS
𝗧𝗵𝗶𝘀 𝗦𝗽𝗶𝗱𝗲𝗿 𝗦𝗵𝗶𝗳𝘁𝗲𝗿 𝗶𝘀 𝗮𝗯𝗼𝘂𝘁 𝘁𝗼 𝗴𝗲𝘁 𝗰𝗮𝘂𝗴𝗵𝘁 𝗶𝗻 𝗮 𝘄𝗲𝗯 𝗼𝗳 𝗹𝗼𝘃𝗲!
The owner of the Underworld’s premier boutique, Metamorphosis, is too busy to find a boyfriend. But when the Goddess of Love decides to fix her up, what choice does she have? It’s off to a round of speed dating for the sassy Spider Shifter. But Arachne has her misgivings. After all, who could love an eight-legged freak like her?
Everyone knows Griffin Jara is the most lethal legate in the Daemonium Guard. When his boss calls him in with a special request, Griff just can’t say no. But how can he attend the Underworld Cafe's Wednesday night speed dating event when he can’t get close enough to a female to touch her? It’s a problem. And one he can’t solve alone. Luckily, his boss knows just who to call.
Can the half-Demon and the spider queen work together in this steamy paranormal romance tale?
𝘈𝘳𝘢𝘤𝘩𝘯𝘦 𝘪𝘴 𝘣𝘰𝘰𝘬 𝘵𝘸𝘦𝘭𝘷𝘦 𝘪𝘯 𝘵𝘩𝘦 𝘚𝘱𝘦𝘦𝘥 𝘋𝘢𝘵𝘪𝘯𝘨 𝘸𝘪𝘵𝘩 𝘵𝘩𝘦 𝘋𝘦𝘯𝘪𝘻𝘦𝘯𝘴 𝘰𝘧 𝘵𝘩𝘦 𝘜𝘯𝘥𝘦𝘳𝘸𝘰𝘳𝘭𝘥 𝘴𝘩𝘢𝘳𝘦𝘥 𝘸𝘰𝘳𝘭𝘥, 𝘧𝘪𝘭𝘭𝘦𝘥 𝘸𝘪𝘵𝘩 𝘭𝘶𝘴𝘵𝘧𝘶𝘭 𝘩𝘢𝘭𝘧-𝘋𝘦𝘮𝘰𝘯𝘴, 𝘴𝘶𝘭𝘵𝘳𝘺 𝘚𝘱𝘪𝘥𝘦𝘳 𝘚𝘩𝘪𝘧𝘵𝘦𝘳𝘴, 𝘢𝘯𝘥 𝘮𝘰𝘳𝘦.
#paranormalromance #shifters #fallenangels #demons #Underworldseries #fatedmates #cdgorribooks #sexytimes #shifterromance #bookseries
at 5:00 PM No comments:

Read this steamy shifter story now for no charge on Amazon, Apple, Kobo, and Nook! 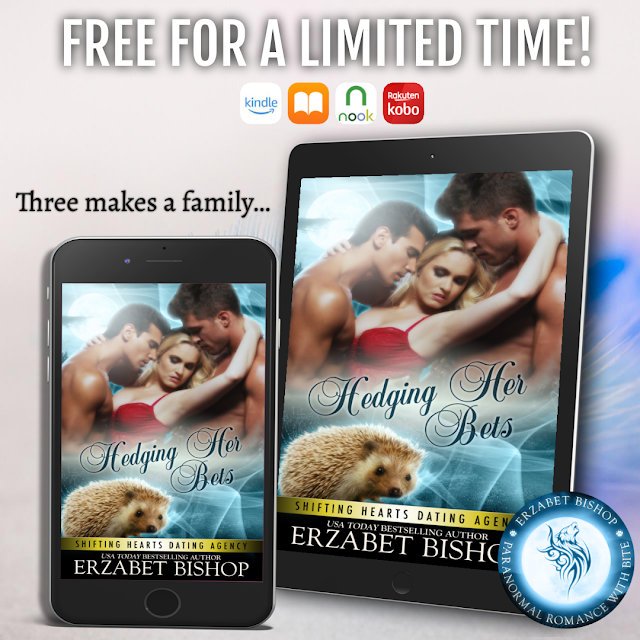 Read this steamy shifter story now for no charge on Amazon, Apple, Kobo, and Nook!

There is strength in submission…and knowing who you are.

Natalie Erinaceus has a problem. Her manipulating mother won’t stay out of her dating life. One more dinner with a blind date and someone is getting a fork to the eye. Her inner hedgehog wants a mate and nothing is going to stop her. Not her nervous hedgie’s habit of balling-up and certainly not that online questionnaire. Who writes those things anyway?

When Sylvia and Paige from Shifting Hearts Dating Agency step in maybe, just maybe this curvy girl will find more than she ever dreamed in the arms of the men who are fated to be her mates.

Nothing ventured, nothing gained…

Jonathan Blevins is a bear shifter looking for love. His family murdered by poachers, he came to Cypress Canyon to rebuild. When he finds Lucas, its one step in the right direction. He has one mate but can he convince a stubborn hedgie she’s ready to be claimed by not just one mate, but two? 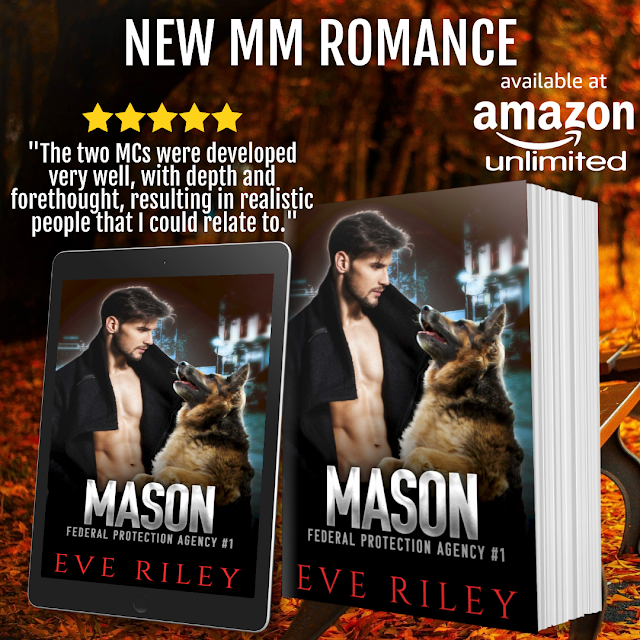 𝗠𝗮𝘀𝗼𝗻 (𝗙𝗲𝗱𝗲𝗿𝗮𝗹 𝗣𝗿𝗼𝘁𝗲𝗰𝘁𝗶𝗼𝗻 𝗔𝗴𝗲𝗻𝗰𝘆, #𝟭) 𝗯𝘆 𝗘𝘃𝗲 𝗥𝗶𝗹𝗲𝘆 𝗶𝘀 𝗹𝗶𝘃𝗲!
Available in Kindle Unlimited
Amazon: https://amzn.to/3QjbyMr
Universal: https://books2read.com/FPA1
Paperback: https://amzn.to/3vJv9NP
𝗧𝗵𝗲𝗿𝗲 𝗶𝘀 𝗳𝗿𝗲𝗲𝗱𝗼𝗺 𝗶𝗻 𝗮𝗰𝗰𝗲𝗽𝘁𝗮𝗻𝗰𝗲…
Mason Wright works for Homeland Security focusing on crimes against children. Five year old Koda is his beloved K9 partner, and aside from his brother, Koda is the only family Mason has. Recently diagnosed with PTSD, Mason takes some much needed time off to go visit his brother, but the little vacay unexpectedly turns into yet more work as he’s assigned the job of creating a task force to track down Jasper Monroe for his crimes. Monroe leads them on a merry chase but as they head into Mexico, Mason has a plan to take the dirty cop down.
Jarod Lopez a new detective in the police force. Saddled with a homophobic partner, Jarod remains in the closet and just does as he’s told as the rookie of the department. Caring for his drug addict mother and hiding from his father’s past, Jarod keeps his head down and doesn’t make waves. The situation makes for a lonely life with little chance of his skills as a detective being put to good use. When the coveted chance to join a recently developed task force drops in his lap, Jarod jumps at the opportunity. Paired up with Mason as his new partner, Jarod finds himself experiencing things he never thought possible.
Will the pair find love while they chase down the bad guy and bring him to justice?
#gay #mm #gayromance #mmromance #gayfiction #manlove #gayromreads #lgbt #MMFiction #mmromreads #gayfic #gaybookseries #detectiveromance #actionromance #romanticadventure #everileybooks #kindleunlimitedbooks
at 6:00 PM No comments: 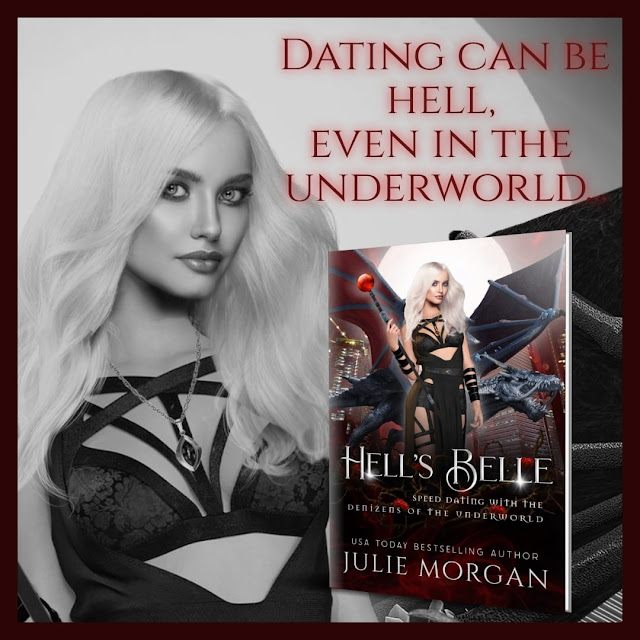 𝗛𝗲𝗹𝗹'𝘀 𝗕𝗲𝗹𝗹𝗲 (𝗦𝗽𝗲𝗲𝗱 𝗗𝗮𝘁𝗶𝗻𝗴 𝘄𝗶𝘁𝗵 𝘁𝗵𝗲 𝗗𝗲𝗻𝗶𝘇𝗲𝗻𝘀 𝗼𝗳 𝘁𝗵𝗲 𝗨𝗻𝗱𝗲𝗿𝘄𝗼𝗿𝗹𝗱, #𝟭𝟭) 𝗯𝘆 𝗝𝘂𝗹𝗶𝗲 𝗠𝗼𝗿𝗴𝗮𝗻 𝗶𝘀 𝗻𝗼𝘄 𝗹𝗶𝘃𝗲 𝗼𝗻 𝗮𝗹𝗹 𝘃𝗲𝗻𝗱𝗼𝗿𝘀!
Amazon: https://amzn.to/38fD2ST
Universal: https://books2read.com/Underworld11
Paperback: https://amzn.to/3bVz1F0
𝗘𝘀𝗰𝗮𝗽𝗶𝗻𝗴 𝗛𝗲𝗹𝗹 𝗶𝘀 𝗼𝗻𝗹𝘆 𝘁𝗵𝗲 𝗯𝗲𝗴𝗶𝗻𝗻𝗶𝗻𝗴…
Annabelle Clayton’s life was pretty predictable. Quiet as a dormouse, what she lacks in charm, she makes up for in her beauty. Being taller than most women never stops her from wearing heels, and embracing her curves helps her sex appeal when it comes to working at the dark, underground dungeon, Den of Sin. What she never expected, though, was finding out she could see the dark side of everyone… and everything.
A family heirloom has been with Annabelle her entire life and one fateful night, it begins to sing. When she opens it, the unimaginable happens: the spirit of a lifetime ago is released and plummets itself into Annabelle, reminding her of who she once was—a Goddess of the Underworld: Persephone.
Cade Fenix, Beta to the Fenix Dragon pack, agrees to attend the speed dating mingle at DeLux Cafe against his better judgment. The moment he walks in, he knows it’s a mistake… until he sits down at the table of his fated mate. He never saw her coming and from that night forward, Cade embraces what it means to find his mate.
When Cade’s village is attacked, Annabelle’s life is in danger and she is taken by a rival dragon pack. She will surely die if she cannot fight back. And just as Persephone begins to push forward to release her energy, the inner spirit recognizes a familiar being nearby.
Will Persephone intervene in time to save Annabelle’s life?
Will Cade save his kingdom from ruin?
Read the story and find out!
Hell’s Belle is book eleven in the Speed Dating with the Denizens of the Underworld shared world, filled with sinfully hot dragons, reincarnated souls of underworld goddesses, and more.
#paranormalromance #shifters #dragons #dragonshifters #Underworldseries #fatedmates #juliemorganbooks #sexytimes #shifterromance #Persephone #bookseries
at 5:00 PM No comments: 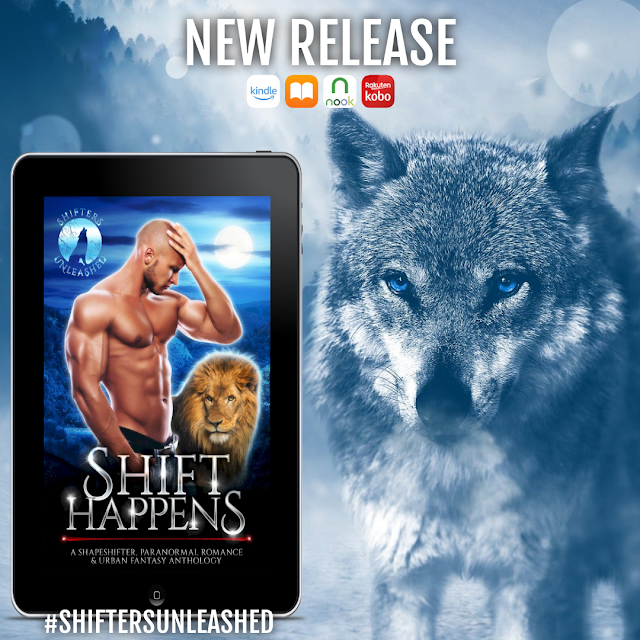 𝗦𝗵𝗶𝗳𝘁 𝗵𝗮𝗽𝗽𝗲𝗻𝘀... 𝘄𝗵𝗲𝗻 𝘆𝗼𝘂 𝗹𝗲𝗮𝘀𝘁 𝗲𝘅𝗽𝗲𝗰𝘁 𝗶𝘁.
Step into the world of the supernatural with this amazing anthology of scorching hot Paranormal Romance and Urban Fantasy stories.
Discover Bears, Dragons, Wolves, Witches, Vampires, and more in this fabulous collection. These tantalizing tales from the bestselling authors you love and new-to-you talent are guaranteed to satisfy.
So, what are you waiting for? Click that button and hop into these amazing stories today. 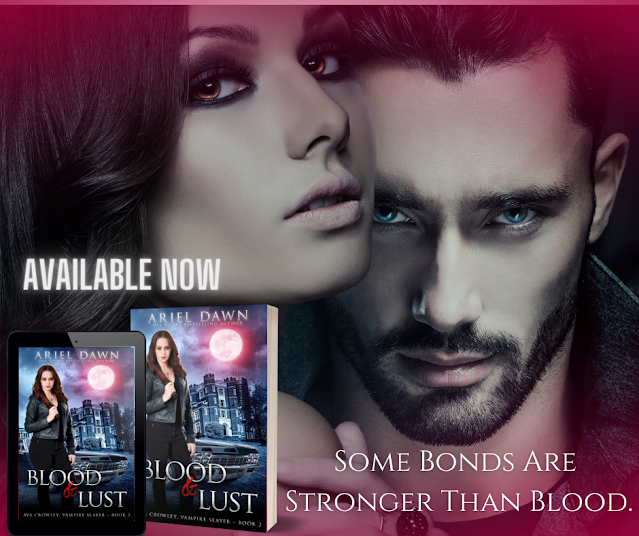 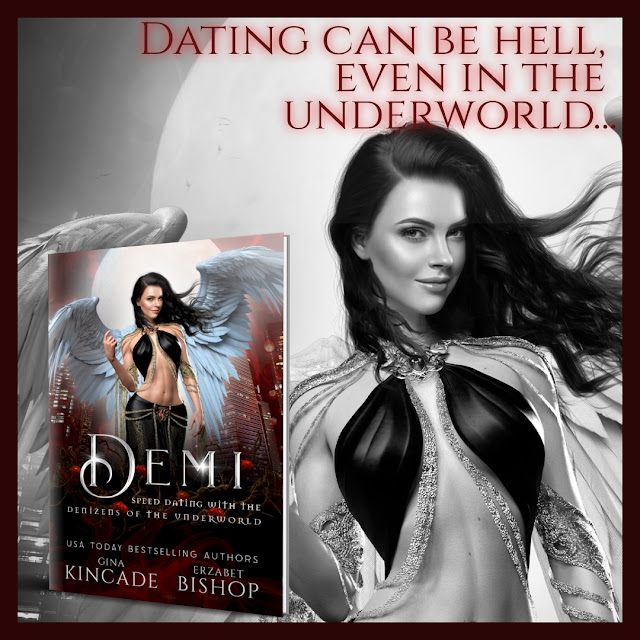 𝗗𝗲𝗺𝗶 (𝗦𝗽𝗲𝗲𝗱 𝗗𝗮𝘁𝗶𝗻𝗴 𝘄𝗶𝘁𝗵 𝘁𝗵𝗲 𝗗𝗲𝗻𝗶𝘇𝗲𝗻𝘀 𝗼𝗳 𝘁𝗵𝗲 𝗨𝗻𝗱𝗲𝗿𝘄𝗼𝗿𝗹𝗱, #𝟭𝟬) 𝗯𝘆 𝗚𝗶𝗻𝗮 𝗞𝗶𝗻𝗰𝗮𝗱𝗲 & 𝗘𝗿𝘇𝗮𝗯𝗲𝘁 𝗕𝗶𝘀𝗵𝗼𝗽 𝗶𝘀 𝗹𝗶𝘃𝗲 𝗼𝗻 𝗮𝗹𝗹 𝘃𝗲𝗻𝗱𝗼𝗿𝘀!
Amazon: https://amzn.to/39bBSIb
Universal: https://books2read.com/Underworld10
Paperback: https://amzn.to/3oM8rkf
𝗖𝗮𝗻 𝗮 𝗚𝗼𝗱𝗱𝗲𝘀𝘀 𝗳𝗶𝗻𝗮𝗹𝗹𝘆 𝗴𝗲𝘁 𝗹𝘂𝗰𝗸𝘆 𝗶𝗻 𝗹𝗼𝘃𝗲?
Demi Aarden, Goddess of the harvest and professional baker, is tasked with creating the King of the Underworld’s wedding cake. But Demi has a problem. Although her baking is renowned as the best, it’s tied directly to her emotions. Recently unlucky in the romance department, her self-confidence…and her baking, just haven’t been the same.
When Lucifer’s wife-to-be, Chloe, convinces Demi to take a chance on the Speed Dating Night at the DeLux Underworld Café, what does the Goddess have to lose?
Charles Buchanan is a successful banker, but a total failure when it comes to love. His housekeeper sets him up to attend a speed dating event at the DeLux Cafe where, to his utter surprise, he meets the perfect woman.
Well, almost perfect. She’s gorgeous, talented, and amazing in bed, but she thinks she’s a Goddess.
Can Charles come to terms with Demi’s Goddess status, or is he destined to lose the first woman to make him feel like a future in love is worth looking forward to?
Demi is book ten in the Speed Dating with the Denizens of the Underworld shared world, filled with feisty Goddesses, panty-dropping millionaires, and more.
#paranormalromance #Goddess #demons #Underworldseries #fatedmates #ginakincadebooks #erzabetbishopbooks #sexytimes #millionaires #bookseries
at 4:00 PM No comments: