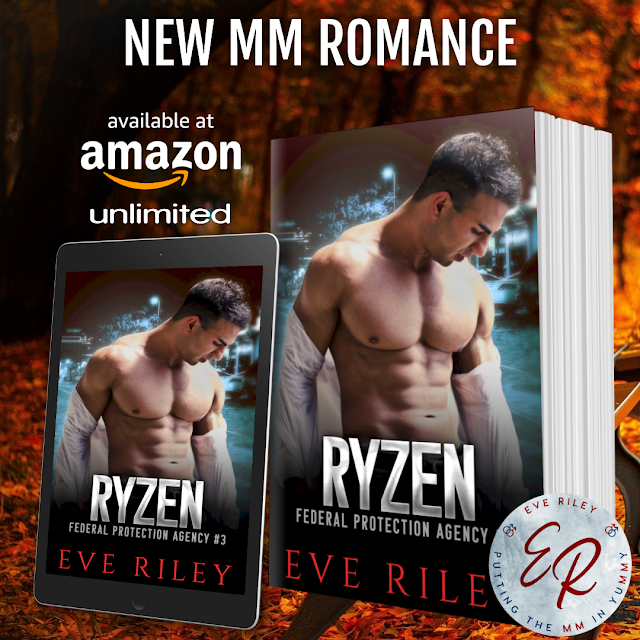 𝗥𝘆𝘇𝗲𝗻 (𝗙𝗲𝗱𝗲𝗿𝗮𝗹 𝗣𝗿𝗼𝘁𝗲𝗰𝘁𝗶𝗼𝗻 𝗔𝗴𝗲𝗻𝗰𝘆, #𝟯) 𝗯𝘆 𝗘𝘃𝗲 𝗥𝗶𝗹𝗲𝘆 𝗶𝘀 𝗹𝗶𝘃𝗲!
Read in Kindle Unlimited.
Amazon: https://amzn.to/3JVQgCr
Universal: https://books2read.com/FPA3
Paperback: https://amzn.to/3fQ42vH
𝗧𝗿𝘂𝗲 𝗲𝘃𝗶𝗹 𝗹𝘂𝗿𝗸𝘀 𝗶𝗻 𝘁𝗵𝗲 𝗱𝗮𝗿𝗸𝗻𝗲𝘀𝘀…
Recruited at eighteen by the CIA, Ryzen is one of the best snipers in the world. Now, he’s working with the Federal Protection Agency to aid them in their fight to track down the vile people who perpetuate crimes against children. Always hidden behind his dark sunglasses, Ry is a mystery to everyone and he prefers it that way.
Ry remembers Knox from when he had his psych evaluation, and that the profiler’s report was what resulted in his discharge from the CIA. He’s not impressed with the man, and even more disturbed by the way he makes Ry feel.
A profiler with the FBI, Knox Hunter is investigating a series of murders. The victims are all male, between twelve and fourteen, and all have the same MO. With the Mayor pushing for re-election, a report of a serial killer could jeopardize the campaign’s success, so Knox is sent in to work with the FPA to try and close the case, fast and by any means necessary. The only problem is, Knox is an office man, not a field man, and this new path could be the most dangerous one of his entire career.
Will Ry be able to keep Knox safe while they track down and put away this serial killer, or is he destined to be the biggest threat—to Knox’s heart?
#gay #mm #gayromance #mmromance #gayfiction #manlove #gayromreads #lgbt #MMFiction #mmromreads #gayfic #gaybookseries #detectiveromance #actionromance #romanticadventure #everileybooks #kindleunlimitedbooks
at 6:00 PM