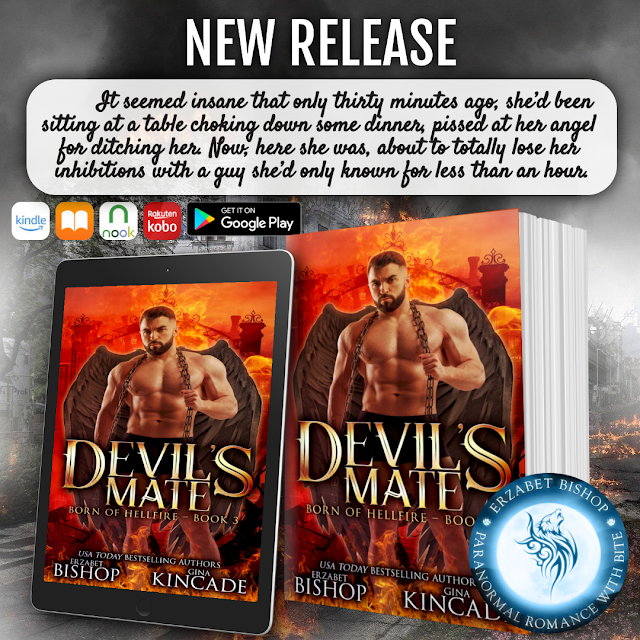 𝗗𝗲𝘃𝗶𝗹’𝘀 𝗠𝗮𝘁𝗲 (𝗕𝗼𝗿𝗻 𝗼𝗳 𝗛𝗲𝗹𝗹𝗳𝗶𝗿𝗲, #𝟯) 𝗯𝘆 𝗘𝗿𝘇𝗮𝗯𝗲𝘁 𝗕𝗶𝘀𝗵𝗼𝗽 & 𝗚𝗶𝗻𝗮 𝗞𝗶𝗻𝗰𝗮𝗱𝗲 𝗶𝘀 𝗹𝗶𝘃𝗲 𝗼𝗻 𝗮𝗹𝗹 𝘃𝗲𝗻𝗱𝗼𝗿𝘀!
Amazon US: https://amzn.to/3Se1WmY
Universal: https://books2read.com/BornofHellfire3
Paperback: https://amzn.to/3SaRih0
𝗦𝗵𝗲 𝘀𝗲𝗲𝘀 𝗽𝗼𝘀𝘀𝗲𝘀𝘀𝗲𝗱 𝗽𝗲𝗼𝗽𝗹𝗲.
Amity Rothchild’s life couldn’t get any more complicated. Born a Guardian against the shadows, she’s already faced her share of battles. Quitting her job as a barista to become an exorcist sounded good... until she tried paying the rent. No one ever told her she was about to become the keeper of a demon cat and two arcane texts that would most likely get her killed. Oh, and throw in one smoking hot hook up with a guy who may or may not be the Devil in blue jeans. Yeah. Complicated is her middle name.
𝗔 𝗯𝗿𝘂𝘀𝗵 𝗼𝗳 𝗯𝗹𝗮𝗰𝗸 𝘄𝗶𝗻𝗴𝘀… 𝗮𝗻𝗱 𝘀𝗰𝗼𝗿𝗰𝗵 𝗺𝗮𝗿𝗸𝘀.
Being the Devil is a full time job. Lucas Morningstar can attest to that. Disappearing demons, corporate takeovers, managing the seven deadlies, and a sister who wants him dead. Yeah. Whoever said it was better to reign in Hell than serve in Heaven hasn’t had to do it for the last several millennia. One night at a local bar brings him blissful salvation in the arms of a luscious brunette, but when all Hell literally breaks loose, can he fit all the pieces together before his one and only chance at happiness is taken away forever?
#paranormalromance #urbanfantasy #pnrlovers #shifters #demons #fatedmates #exorcist #possession #series #erzabetbishopbooks #newrelease
at 5:00 PM