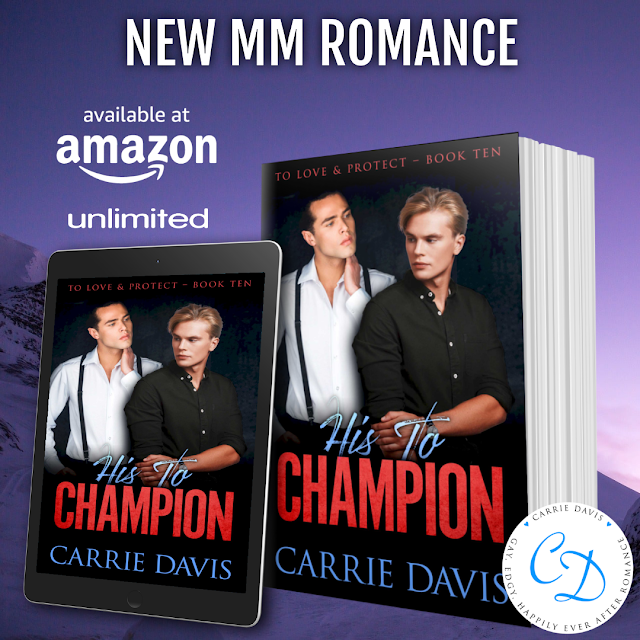 𝗛𝗶𝘀 𝗧𝗼 𝗖𝗵𝗮𝗺𝗽𝗶𝗼𝗻 (𝗧𝗼 𝗟𝗼𝘃𝗲 & 𝗣𝗿𝗼𝘁𝗲𝗰𝘁, #𝟭𝟬) 𝗯𝘆 𝗖𝗮𝗿𝗿𝗶𝗲 𝗗𝗮𝘃𝗶𝘀 𝗶𝘀 𝗻𝗼𝘄 𝗹𝗶𝘃𝗲!
Read in Kindle Unlimited
Amazon: https://amzn.to/3GcbDzB
Universal: https://books2read.com/TLP10
𝗟𝗼𝘃𝗲 𝗼𝗿 𝗹𝗶𝗲𝘀?
All Gavin Chandler wants is to leave his past far behind him. It’s taken him a long time to learn to let go of the guilt of his childhood, to finally believe that none of it was his fault. Leaving behind the father who abused him is one of the best things he’s ever done and he refuses to go back to that less than happy life.
The ex-con has a lot going on in his life and he’s finally on the road to happiness. Romance isn’t even on his radar… until Braxton Irving walks in and Gavin finds he can’t deny his interest. After weeks of building up his courage, he finally asks Braxton out.
Braxton’s feelings for Gavin are real but he hasn’t been completely honest about his motivation for coming to the coffee shop that day. His deception may just bring Gavin’s old life crashing back around him, and he’s not sure he can ever put those shattered pieces back together again.
Will their relationship survive when Gavin learns it started on a lie?
#gay #mm #gayromance #mmromance #gayfiction #manlove #gayromreads #lgbt #MMFiction #mmromreads #gayfic #carriedavisbooks
at 4:00 PM